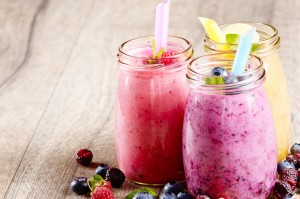 There are a few modern trends for heathy drinks. Two popular options are juicing fruits and vegetables or blending them, with the emphasis on making the drink yourself. There are some advantages and disadvantages to both methods.

Juices are reasonably convenient. They can be made quite quickly if you have a juicing machine. And the minerals, nutrients and vitamins get straight into your system after you drink them, particularity if you drink them on an empty stomach. Juices also allow you to consume many vegetables by mixing them with fruits. This is an advantage if you find a few vegetables otherwise unpalatable.

The disadvantage is the amount of vegetables and fruit needed to make the juice. You do get a lot of nutrition in there, and you probably wouldn’t eat that many vegetables any other way. But it is more pricy than one might expect. And when you juice the ingredients the fibre is lost, so you digestive system is missing something essential, and you don’t feel full.

Juices need to be consumed almost immediately. They will be free from preservative, which is great; but this mean they don’t keep for long – perhaps a day if refrigerated.

A Superfoods smoothie mix is pre-packaged for greatest convenience; you just need to add water. Because of the individually sealed packaging they require no preservatives or refrigeration. And the expense is less than the equivalent amount of fresh produce. Order superfoods smoothie online and always be supplied with a healthy option.

Barbecue is common in Australia. It is not uncommon in other countries. But other cultures and traditions can mean something quite different by the same word, or simply do something different with their meals. Korean BBQ is quite different to Australian Barbeque, even if some of the meats are the same.

Korean BBQ, or Gogigu, will roast meats on the table where the diners are seated. These tables often have the gas or charcoal grills built in, though sometimes this is done with a portable stove. The diners themselves often cook the meats themselves, eating it straight off the grill.

The meats at a Korean BBQ is usually sliced very thin, and sometimes pre-marinated. This thin cut meat cooks quite quickly, and rapidly cools. It can be eaten almost the moment it is cooked. Common Korean BBQ meats include Beef, Chicken and Pork, with a great deal of variation achieved through different cuts and types of marinade. Pork belly and beef rib are particularity popular. The BBQ always comes with side dishes that include vegetables, radish, beans, lettuce, sprouts and peppers.

Like Korean BBQ a Korean buffet has a lot of familiar foods prepared in a slightly different way. Australians tend to be familiar with many Asian foods, so Honey Chicken, Sweet and Sour Pork, Prawns, various Rices and Beef Ribs are welcome sites at any buffet. But Gimbap, which is the Korean variation on Sushi, Pork Belly, and a few other items will also seem familiar. At the same time Seafood pancakes (actually more like an omelette) and octopus are not too dissimilar from what the locals have already tried. Even Seaweed Soup and Cold Jelly Fish Salad managed to be unique without asking the diner to be too adventurous.